Reasons to think twice before going under the knife

With this procedure a surgeon places a tiny camera in the knee, then inserts small instruments through other incisions to repair torn or aging cartilage. Studies show the operation works well when patients have in fact torn their meniscal tissue, but it is no more successful than noninvasive remedies in treating osteoarthritis of the knee. In a 2008 study, 178 patients with osteoarthritis received either physical and medical therapy without surgery, or therapy plus surgery. After two years the two groups had nearly identical outcomes, reporting less pain and stiffness and more mobility.

If you have knee pain, “start with the least harmful and invasive treatment and work your way up the ladder,” says Colin Nelson, a senior research associate at FIMDM. This includes lifestyle changes such as exercise, as well as medication and cortisone injections.

Reasons to think twice before going under the knife

With spinal fusion, a surgeon places bone grafts that “weld” two or more vertebrae together to prevent motion and stop pain. The procedure is often used to treat back pain from spinal stenosis, which occurs when the soft tissues between the vertebrae flatten out, creating pressure on the spinal cord or nerves that go to the back, arms, neck, shoulders, and legs. There is little consensus on how best to relieve pain from stenosis, so doctors tend to develop their own preferences, says Richard Deyo, M.D., professor of medicine at Oregon Health and Science University.

Their top treatment choice increasingly seems to be fusion. Deyo recently studied the records of more than 30,000 Medicare patients who underwent surgery for stenosis of the lower back and found that complex fusion procedures (in which surgeons place bone grafts between multiple vertebrae) had increased an astounding 1,400 percent between 2002 and 2007.

The risks are significant: Those who underwent complex fusion were nearly three times more likely to suffer life-threatening complications than those who underwent less invasive surgery. Previous studies have also found that most fusion patients experience no more relief from their chronic back pain than those who had physical and behavioral therapy. “There is even some evidence that [complex fusion surgery] is worse than other surgeries,” says Floyd J. Fowler Jr., Ph.D., senior scientific advisor for the Foundation for Informed Medical Decision Making (FIMDM). “The vertebrae right above and below the fusion have to do a lot more bending, and it puts stress on your back above and below.”

Before considering any type of back surgery, make sure you have exhausted more conservative measures, including physical therapy, cortisone injections, acupuncture, and medications. “Probably less than 5 percent of all back pain requires surgery,” says Arnold Weil, M.D., clinical assistant professor of rehabilitation medicine at Emory University School of Medicine in Atlanta.

In June of 2013, my sister began seeing Dr. Shmuel Tatz. She has been suffering for years with a herniated disc. The misguided treatment had later brought on other issues causing her pain throughout her body. With very little relief from other physical therapists we were not sure what to expect from Dr. Tatz. On our first visit she explained her injury and they kept the conversation between them to a minimum. He knew exactly where her pain was and was able to alleviate the numbness in her big toe instantly. This was surprising since she had been complaining about this for almost a year to other physical therapists. I have watched many physical therapists work with her over the course of 6 years and have yet to see anyone like Tatz. With very little words he understands and can point out her pain without her having to explain what she is feeling. After so many years of her having to explain her pain, she got tired of the charts and having to constantly describe what she was feeling. It just felt as if none really understood her pain. After that first visit my sister felt understood, without having to go into so many details about what she was feeling. He told her that every time she left there she should feel a difference.

END_OF_DOCUMENT_TOKEN_TO_BE_REPLACED

These exercises will help alleviate tension in your joints, ligaments and muscles, whether you work at a computer a couple of hours a day or spend most of your day in front of a computer screen. Do them the moment you start to feel tired or sense tension or tightness in any area of your body. The exercises are simple to perform and can be done while sitting at your desk. Some are stretches, others are isometric exercises, which means you’ll tense a certain muscle group for 5-10 seconds, then relax.

Cold Laser (also known as LLLT – Low Level Laser Therapy) utilizes specific wavelengths of light to interact with tissues to stimulate healing. The red light therapy communicates with damaged cells which respond with regeneration. Though the device touches your skin, you feel no heat, hear no sound, and ultimately get to rest for the 15-10 min period of modality treatment.

Cold Laser is one of the treatments used, which is essentially a light amplifier, building on beliefs about the healing power of light going back to Hippocrates and ancient times. Throughout history many believed that light therapy could harness the power of the sun to heal. However cold laser is different from the sun in that it is a compressed waveform, usually from the red spectrum of electromagnetic radiation. Low-level lasers provide a form of pure light to deeply penetrate the surface of the skin without heating or damaging body tissues.

Cold Laser has been approved by the FDA as an effective painless drug free therapy successful in treating muscle spasms, nerve pain and arthritis. It has also been shown to increase the speed of wound and fractures healing. It is recommended to use cold laser therapy for sprains, tendonitis, bursitis, tennis elbow, low back pain, and the like.

Cold Laser Therapy can be used for skin rejuvenation, treating acne, psoriasis, burns, and the like by dermatologists. This therapy can be utilized to help many different points of pain and inflammation. Research is still being done to find more ways cold laser can be used to heal the body.

For musicians, professionally related physical trauma can be one of the worst kinds of trauma because working musicians can repetitively, step-by-step, hour-by-hour continue to damage their bodies.

Musicians’ injuries usually don’t happen overnight, and healing doesn’t happen in one day. It takes time. Injuries related to the music profession can become aggravated because they are generally related to overuse and are difficult to avoid.

It is the job of a good physical therapist to help a musician heal in the shortest amount of time because the next day he or she may be off to London, Moscow, or Tokyo. Whatever the case may be, working musicians must be in excellent physical condition.

I have been working with musicians for more then 30 years. Using a hands-on physical therapy method, I have learned to feel the musician’s pain so that I can help him or her heal as quickly as possible.

I also have learned that being a musician is not just a profession, it’s a lifestyle. In order to play, you have to be in top shape, but you have to be prepared for injuries as well. This means you must know how to find the right kind of physical therapist in whatever city you are playing, just in case treatment becomes necessary for the show to go on. To help I have compiled a list of frequently asked questions:

END_OF_DOCUMENT_TOKEN_TO_BE_REPLACED 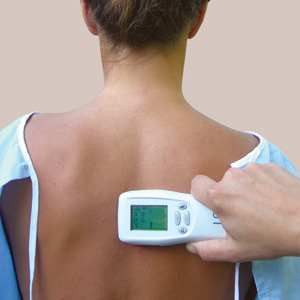 SCENAR (Self Controlled Energo-Neuro-Adaptive Regulator) method is one of the most sophisticated and powerful healing techniques in the world. Because of its unique, computer controlled biofeedback capabilities and ability to stimulate the neuropeptide generating C-fibers of the nervous system, SCENAR locates adapted (malfunctioning) areas of the body such as an organ. muscle, gland, etc. that the body circumvents as it starts to malfunction. In order to conserve healing energy and nutrients, rather than repair, our body tries to find an alternative pathway or method to perform the function. As our body adapts more and more, the malfunctioning area is disconnected from our brain and natural healing mechanisms_ The SCENAR awakens the area, reconnects it to the healing mechanism, signals when this is done, and than generates healing energy and neuropeptides, the key biochemical needed by the body to heal itself.

END_OF_DOCUMENT_TOKEN_TO_BE_REPLACED 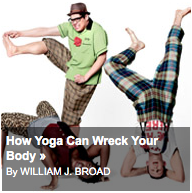 For all Yoga Practitioners and Teachers the article below is very very important and useful. Couple of weeks back the entire Yoga Community was rattled by an article in New York Times by William Broad titled “How Yoga Can Wreck Your Body” and while there was a big debate for and against the article, I found the following letter by Shmuel Tatz to New York Times best explains how we need to go about addressing the issue of injuries in yoga without getting overtly emotional about the original article.

END_OF_DOCUMENT_TOKEN_TO_BE_REPLACED 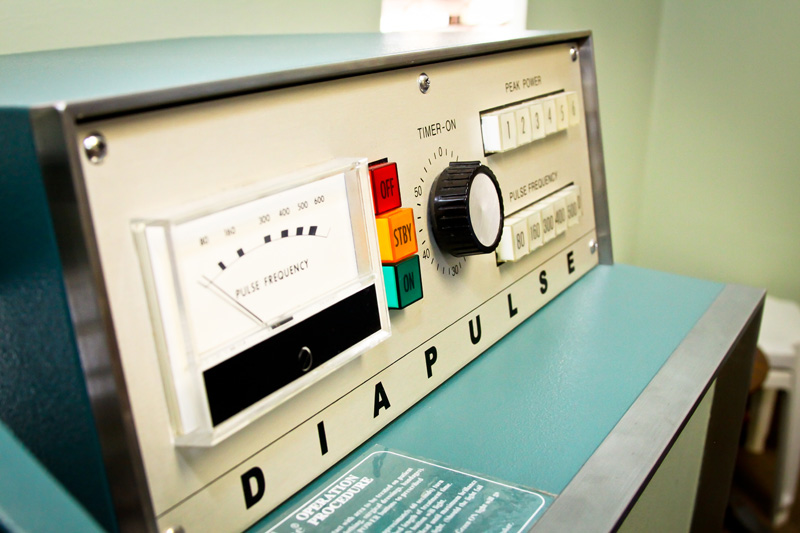 Diapulse is a device that directs a pulsed electromagnetic field to an area of injury. Both animal and human studies indicate that this treatment protects neurons, promotes regeneration, and minimizes lost nerve function. In addition, Diapulse greatly accelerates the healing of SCI-associated pressure sores.

Diapulse directs electromagnetic energy to a specific body area through a cylindrical treatment mounted on an adjustable bracket.

END_OF_DOCUMENT_TOKEN_TO_BE_REPLACED

Do you feel numbness or weakness in your hands when you wake up or go to sleep? Do you have trouble holding or grasping objects, like a leash or the lid of jar? You may suffer from Carpal Tunnel Syndrome (CTS), a musculoskeletal disorder associated with but not necessarily caused by repetitive movement of the wrist in a workplace or at one’s leisure. Certain conditions such as obesity, arthritis, diabetes, thyroid disease, and trauma are all proven to be triggering factors to CTS.

CTS most commonly affect people who work with their hands. Women in manufacturing industries, musicians, and people who work with computers are commonly at risk. CTS is the second most common reason, after back-pain, for seeking medical care, among both men and women. People with CTS commonly complain of numbness, tingling, or pain of the wrist, often at night and aggravated by repetitive motion. If not treated, people with CTS can lose their ability to grip and become permanently disabled.

As you can see in the diagram below, the median nerve passes through the carpal tunnel, a narrow passageway on the inner surface of the wrist, where muscle-flexing tendons pass through to the digits of the hand. The problems arise when the tendons become inflamed, either through repetitive use or other factors, such as those listed above, compressing the median nerve. This causes symptoms that are often, though not necessarily, attributed to CTS.

“A common nerve disorder that often appears alongside carpal tunnel syndrome is trigger finger, where swelling of the tendons of the index finger or thumb results in soreness or locking of the digit in a flexed position,” writes John Hopkins Health. De Quervian’s disease is another possibility. 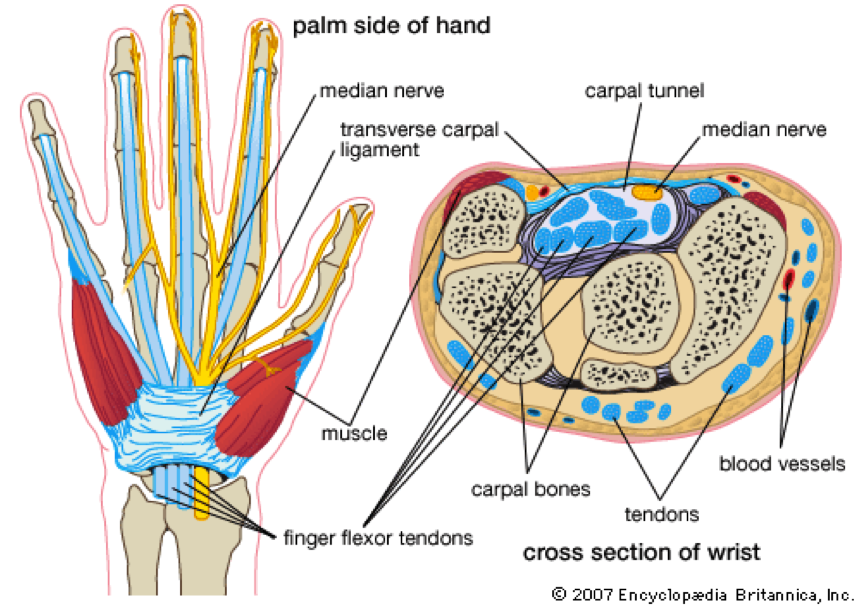