Shmuel Tatz is the favoured physiotherapist of many of Manhattan’s Leading Musicians, among them New York Philharmonic Violinist Hanna Lachert 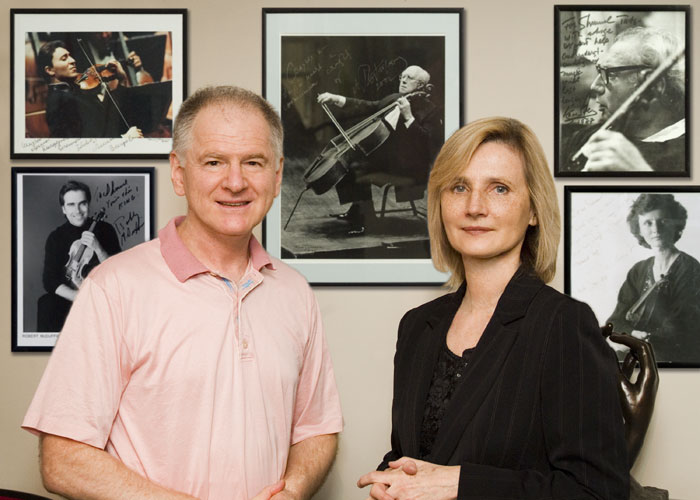 I WAS INTRODUCED TO HANNA ABOUT 20 YEARS AGO THROUGH her husband, the Manhattan violin maker David Segal; she has been a regular client ever since.

Eighty per cent of her treatment is using hands only and for the other 20 per cent she gets individualized exercises. Just like a violin pupil plays a sonata at their lesson and the teacher after listening to it makes some suggestions, big and small, so only when I am touching or watching the body can I maneuver it and give some suggestions, some ideas. Hanna’s a very good student as, like most musicians, she has the discipline needed to practice. You don’t need to rush to the tuner, you can do self-tuning – if you have problems you need to go to the master, but mostly you can do it on your own.

I wish in our sessions we could talk about the interpretation of music – I can only listen, to hear how in tune the body is. When I’m working on a musician’s body I’m listening with my fingers, my hands; I can feel the vibrations of every muscle, every joint and every organ.

One thing I have learnt from Hanna is not to wait when we have some little problem – the sooner you go to the tuner, the less time it takes to get better. With Hanna, any discomfort in the body – perhaps she feels something a little bit out of tune – and she immediately calls and makes an appointment; it takes a couple of sessions and everything’s OK. She doesn’t wait until the body starts to scream and needs to takes some drug straight away.

I often hear Hanna play. I recently heard her in piano trios by Rachmaninoff, Chopin and her composer brother Piotr. I’m crazy about piano trios, so I enjoyed that very much. Fortunately she’s a very active chamber player and doesn’t only work with the Philharmonic. But not long ago I also heard her play in Verdi’s Requiem. Afterwards we were having some supper together and she was so excited – she said, ‘This time not only you had fun but I had fun.’ It’s a great piece – 90 minutes felt like 15 or 20.

I’ve learnt so much from Hanna and other musicians about their particular physiological challenges and ailments – things that other health professionals haven’t always grasped. For example, I’ve had violinists with shoulder problems who have been to very well-known orthopedists. One of them had a session following a famous tennis player who had got over a shoulder complaint by switching arms – so the orthopedist suggested the same for the violinist! It shows such little understanding of violinists! Hanna knows to phone me before she has an injection or gets some medicine; she knows to trust me.

THE FIRST TIME I SAW SHMUEL WAS AT MY HUSBAND’S SHOP; he was with a violinist friend of his who was one of my husband’s clients. That fellow was raving how fantastic Shmuel is. I was skeptical at first – just another physiotherapist. He insisted on demonstrating right there on the floor what he could do and it was encouraging. So I said alright, I’ll try. And true enough I was very much impressed and have been going to him ever since, whenever I have a problem.

In my case it’s often my shoulder, but recently I had some swollen joints and he was able to help with that – which borders on a miracle! My husband, David, once twisted his ankle so that he was on crutches, painkillers – you name it. The next day we called Shmuel, who said to just come over; we drove there and an hour later David walked back to his work.

My sessions with him don’t involve me playing, but he will show me exercises to improve my condition. On a basic level he told me always to pay attention to the way I sit, the way I drive, what’s happening to my shoulders when I write or am at the computer – basic things about posture that we tend to forget. That’s on top of his manipulations. He also uses some electronic devices – I’m not sure what they are, but I trust him!

“When I met Shmuel he insisted on demonstrating his treatment right there on the floor.”

We usually talk about music, because Shmuel loves it and he goes to many, many concerts. He’s very knowledgeable and strongly opinionated about who he likes and who he doesn’t and why. He comes and hears me with the New York Philharmonic perhaps once or twice a month, and he comes to practically all my chamber music concerts. He doesn’t like too much new music, but at my last concert at BargeMusic I played a piece written for me and my piano trio by my brother, and Shmuel said he liked it. It was only written last year, so very contemporary – I was happy that he could appreciate it.

We’ve long been friends and he sometimes comes to us for dinner or festivals such as Passover. We have a tradition on the first of January of an open house; all our friends come with their instruments and we play chamber music, accompanied by food and wine. He’s been to that several times and he even surprised me once and revealed e can pay the piano.